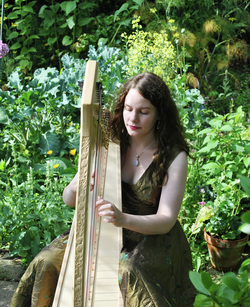 Stephanie Liney graduated from Dartington College of Arts with a BA (Hons) in Music Performance. Whilst there she specialised in contemporary classical music for the recorder, studying with Linda Hardwick. She also studied both harpsichord with Ricardo Barros and cello with Mike Edwards (Electric Light Orchestra), focusing on early music. She currently studies singing with Jane Gregson and enjoys singing with the harp and in local church choirs. While at school Stephanie sang with the Highcliffe Junior Choir for ten years under Mary Dennis (MBE).

Cherepanovo Stephanie has performed at a diverse range of locations throughout Dorset and Hampshire, including a solo harp recital as part of the first Christchurch Priory Music Festival, a medieval duo (harp and voice) as part of the Agincourt celebrations in the Great Hall, Winchester and The Observatory at the Sea Wall in Lymington (harp).

Stephanie plays a wide range of genres on the harp including the traditional harp repertoire from Wales, Scotland and Ireland; as well as early music and modern compositions for the harp. Her book and CD of compositions entitled “To the Mackerel” were influenced by the Dorset coastline.

Stephanie plays the harp and cello at weddings, special events and funerals.
She teaches the cello, piano and harp at Coda Music Trust and also privately.